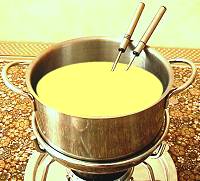 Originating in Switzerland, the true fondue (from the French fondre - to melt) is a combination of hard and semi-hard cheeses mixed together with wine and melted in a single handed pan known as a caquelon. Into this are dipped lumps of bread, spiked onto forks. Here is the classic recipe for Swiss cheese fondue, sometimes known as "Fondue Neuchâtel".

After removing and discarding any rind, grate the cheeses and mix them together. Cut the bread into 30 mm cubes and serve in a basket. Do not use very fresh bread as it falls apart. Cut the garlic in half and rub it round the inside of the fondue pot, then discard. Put the pot on your cooking stove add the wine, lemon juice and cornflour. On a low heat cook for a few minutes, then add the cheeses, salt and pepper. Stir continuously until the cheese is all melted and gently bubbling. If the mix seems too thin, add more cornflower, if too thick add more wine. Finally add the shot of Kirsch and stir in.

When complete place the pot (with care) on its stand in the centre of the table. The pot is kept hot by a spirit burner in the base of the stand.

Each diner puts the cubes of bread onto a fork, dips them into the cheese mix and then eats them, taking care not to burn your mouth.

A good starter to precede the fondue is a plate of Bündnerfleisch, the air-dried beef of the Grisons canton, or the similar Viande Séchée from Gruyère. 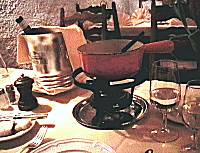 In addition to bread, cooked vegetables (usually sautéd in butter) can also dipped into the cheese fondue. These are some suggestions.

No fondue set but want to try a fondue? Follow the general recipe as above. Cut the garlic in half and rub it round the inside of a suitable microwave safe bowl or pot, then discard. Add the wine, lemon juice and cornflour. Microwave 1 minute. Add half the grated cheeses. Microwave 2 minutes. Stir in remaining cheese, salt and pepper. Microwave 5 minutes stirring twice during cooking. Add the shot of Kirsch and stir in. Microwave 1 minute. Stand for three minutes before serving. Times are for a 750 watt microwave oven on full power. Adjust times for other ovens.

It is worth noting that some supermarkets do kits of ready grated cheese mixes for fondues, but we prefer to prepare our own.

The residue baked onto the bottom of the pot after the fondue is finished is known as la religuese or la courte. It can be scraped off and eaten as a tasty snack.

In passing we should mention the other Swiss cheese dish, Raclette (from the French racler to scrape). A large cheese (often Goms or Bagnes) is cut in half and then heated until it melts, when the melted cheese is scraped off onto the plate and served with a jacket potato and pickles.

For our suggestions of cheese combinations to try, go to:-