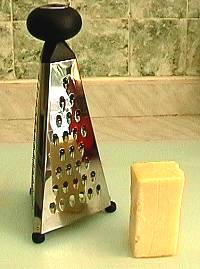 The cheese fondue gives the maximum scope for experiments. You can try all your favourite cheeses, alone or in combination. Most hard and semi-hard cheese that melts nicely can be used. Test by melting a bit on some toast first to check. Here we have created some "national" and interesting fondues that you might like. Use the recipe on the Cheese Fondue page but substitute a total of 400 to 450 grams of these cheeses. We have checked them all out.

When using milder cheeses, flavour can be increased by adding nutmeg, paprika, Tabasco, mustard, ground cumin or Worcester Source. Thicker fondues can be thinned with a little double cream. As a variant, instead of using wine in the fondue try beer, lager or cider, and other spirits such as Whisky instead of the Kirche.

A Moitié Moitié based on these two Swiss cheeses.

The first cheese comes from cows grazing on pasture around Piz Bernina (4049 m), to the north of the Bernina Pass. The second is from the Poschiavo valley, just to the south side of the pass. We had a starter of Bündnerfleisch, which had also been produced in this region.

Two alpine cheeses from the Grindelwald pastures of the Jungfrau region of the Bernese Oberland. Once more Bündnerfleisch makes a good Swiss starter.

These Burgkäse are from the valley below the Titlis (3238 m) in the central region of Switzerland.

These three cheeses are from the adjacent cantons of Lucerne, Bern and Valais.

Use the three cheeses in equal quantities to produce a fondue by the standard method. To the mixture add a couple of finely chopped spring onions, a finely chopped mushroom, pinches of dried sage, thyme and parsley. Season with Swiss Raclette spice. A very tasty fondue.

Serve with sautéd baby chestnut mushrooms in addition to bread.

A blend of these three cheeses made from Vorarlberg milk.

Three cheeses from the Austrian Tyrol around Kitzbühel.

The first of these cheeses contains wild garlic. Rebell cheeses are made from hay milk and this one contains peppers. The Bergkäse was added to strengthen the flavour.

To celebrate the late Queen Elizabeth II's Platinum Jubilee, we tried this blend of classic English cheeses, perhaps with a glass of Champagne.

Serve with sliced apple in addition to bread.

Use red wine instead of white and add some tomato purée to the mixture.

To get the blue look, keep back a little of the cheese with "blue streaks" and add just before serving.

Serve with baby leeks and potatoes, we tried anya potatoes, in addition to bread.

Two cheeses from the Isle of Man Milk Marketing Association, blended to produce this unusual fondue. The Oak Smoked combines the flavour of Manx mature cheddar with that from the Island's traditional smoking skills. The Black Peppercorn adds bite.

As these cheeses are soft, keep the wine quantity to a minimum. Sauté a chopped onion in butter together with a little brown sugar, a splash of balsamic vinegar and some garlic, and add to the mixture. Serve with sautéd baby chestnut mushrooms and with some of the bread lightly toasted to form croûtons.

Two cheeses produced by farmers in this region of the French Alps. Add grated nutmeg to the mixture.

A Savoyarde style fondue with local cheeses from around Albertville. Add grated nutmeg to the mixture.

Add grated nutmeg to the mixture. A Savoyarde style fondue but using Saint Marcellin, a cheese from the Dauphiné region east of Grenoble.

Made with white Bordeaux wine and using two cheeses that are often sold in the Bordeaux region. We also added small pieces of fried bacon to the mix (as in Fondue Paysanne) and served with sautéd baby chestnut mushrooms.

Note the Italians tend to make their fondues thinner than the Swiss, and often serve them as starters.

Cheeses from the Dolomites. Fodom is produced in the area around Cortina d'Ampezzo. Val di Fassa comes from the valley of that name.

A blend of two cheeses (siers) from Latvia. We served with anya potatoes for dipping in addition to bread.

Add Whisky instead of Kirche.

Wallace would approve of this one.