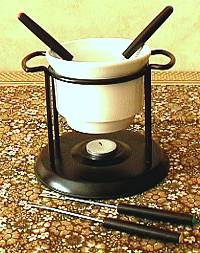 The Chocolate Fondue is a dessert dish served in a small ceramic pot, and consists of dipping fresh fruits into melted chocolate. Shown (right) is the sort of fondue set used.

Cut the fruit into small 25 mm pieces. Serve on individual dishes. Break up the chocolate and mix it with the evaporated milk in a saucepan. Melt over a low heat stirring constantly with a wooden spatula. Alternatively the mixture can be melted in a microwave oven, stirring every 30 seconds until liquid. Some chefs prefer to melt the chocolate in a bowl over boiling water.

Transfer the melted mixture to the ceramic pot, which can be pre-heated with hot water, and place it on its stand in the centre of the table. The pot is kept hot by a small night light (tea light) candle in the base of the stand.

Each diner puts the fruit onto a fork and coats it with the chocolate in the pot.

For those who do not like chocolate (is there anyone?), for those where chocolate does not like them, or just for something different to try, here is a toffee alternative.

In a saucepan gently heat together the sugar, butter and cinnamon until melted and then boil for one minute. Stir in the cream, syrup and the cornflour (mixed with a little water) and cook until the mixture thickens.

Transfer the mixture to the fondue pot and sprinkle on a little more cinnamon, then serve as for the chocolate fondue, being careful not to allow the toffee to burn. An alternative flavour to cinnamon would be to use vanilla in the form of either a pod (opened and with the seeds scraped into the mix) or vanilla extract.